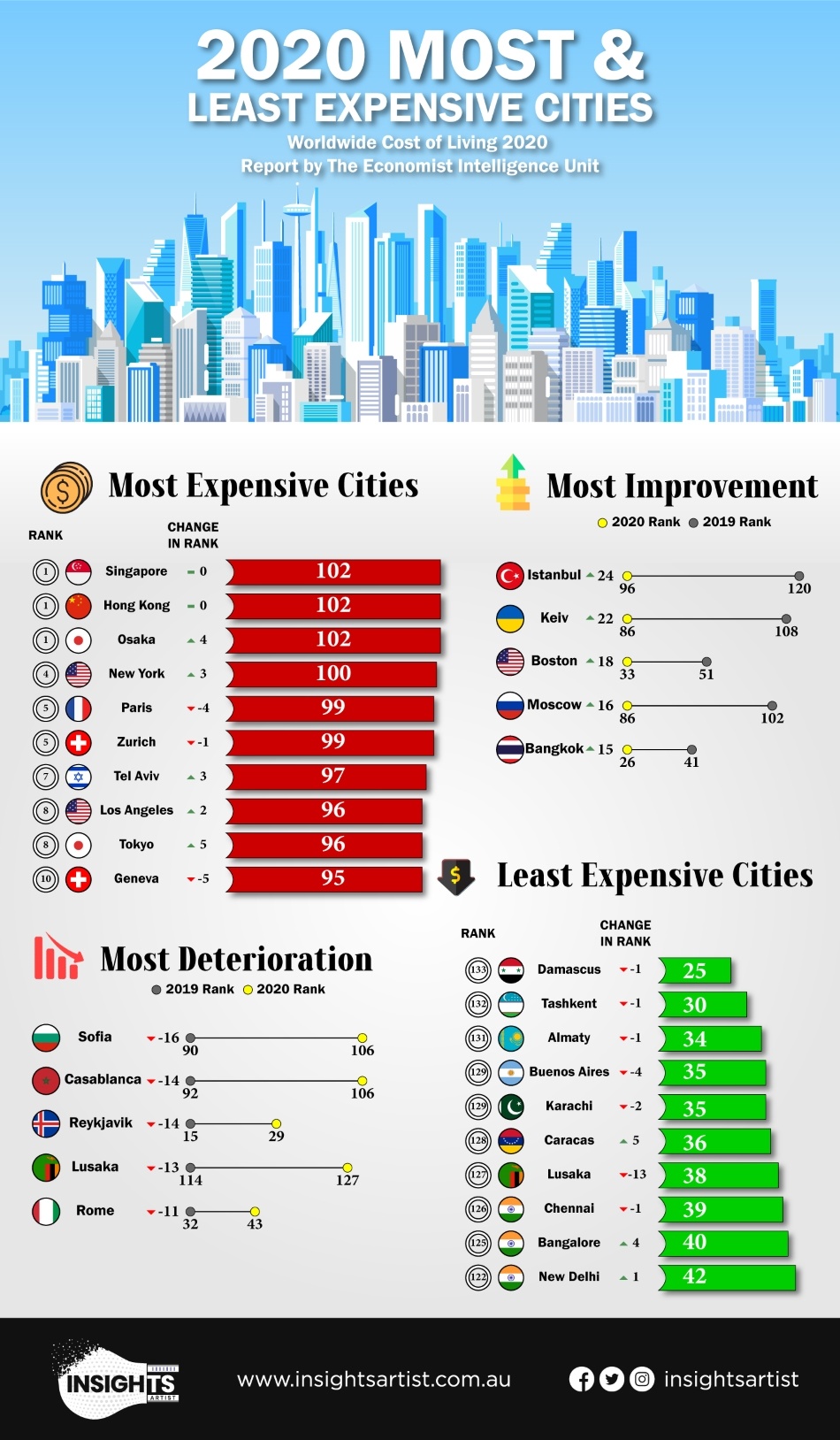 The Economist Intelligence Unit (EIU) recognized as the world leader in global business intelligence, provides data, analysis and forecasts to help make informed decisions based on what is happening around the world. With over 70 years of experience assisting in understanding worldwide trends, risks and opportunities involved, the EIU has positioned itself as an interpreter, commentator and forecaster of the globalization phenomenon. Plainly, the issues happening in different parts of the world eventually have an international or a global impact. For instance, the global pandemic as a result of COVID-19.

The EIU conducts a survey on the worldwide cost of living that compares over 400 individual prices across 160 different products and services. Items compared include household supplies and personal care items, food and clothing, home rents, transport, utility bills, private schools, domestic help and recreational costs. The most recent report of the EIU identified the most and least expensive cities around the world in 2020. The infographic above summarizes a few findings. Full report can be downloaded from here.

The report shows an all-Asian joint top spot as three cities share the spot among the most expensive cities to live in. As with the previous year’s survey on living costs worldwide, Hong Kong and Singapore maintains the status quo as Osaka climbs to the top of EIU rankings. Notably Osaka moves to replace Paris in its ranking, which drops to fifth place along with Zurich, Switzerland. Tokyo, Japan’s capital has also moved up from 13th position to 8th in the ranking. Both Osaka and Tokyo depict the strength of the Japanese yen. Los Angeles ranked 8th position and New York at number 4, are the two US cities with higher costs of living. This is attributed to a combination of strong local currency and a firm domestic demand resulting in driving prices up for domestic help and clothing. Israel’s Tel Aviv, the only Middle Eastern city appearing in top ten ranking, has risen from 10th to 7th position. Compared to Europe, the US dollar has appreciated due to the strength of the United States economy relative to weakness in other economies where growth has slowed. Trends show cities in the US continue to be particularly expensive especially in terms of utilities and domestic help. Similarly the cost of living in Asian cities has for over 10 years remained particularly high as key Asian business centers continue to be the most expensive places for grocery shopping.

Several cities have shown an improvement through movement up the rankings. The most improved city is Turkey’s Istanbul. Following a 2018 currency crisis, the city was deeply affected falling forty eight places behind as the Turkish lira lost value considerably. Currently, the city has managed to rank up to 96th position.

Owing to Ukraine’s rise in export earnings following a perfect record in grain harvest, the Ukrainian hryvnya strengthened against the US dollar causing Kiev to rise 22 places.

Boston rose to 33rd position recording a climb that is attributed to the fast-paced growth in population that pushes up demand.

The Russian government’s decision to increase the VAT from 18% to 20% causing an increase in consumer prices has seen Moscow rise from position 102 to 86th ranking.

Weaknesses in local currencies has greatly influenced the deterioration in most cities causing the downward trajectory in the rankings. For instance, cities such as Sofia, Bulgarian capital, Rome and Reykjavik have ranked low due to currencies losing ground to the dollar. Lusaka’s fall in ranking is largely due to the low living costs as investors continue to flee the country over sovereign default fears.

Limited change in ranking is visible around the world’s cheapest cities, although several trends are evident in the bottom rankings. Evidently, cities in southern Asia such as Karachi and Indian cities like Chennai, Bangalore and New Delhi comprise the largest grouping geographically in the bottom ten places. Due to low wages and high income inequality levels limiting household spending, South Asia remains cheap. The second trend among the low-ranked cities ranked low is the increasing prevalence of domestic, economic and political instability. This is evidenced in cities like Caracas moving from 133rd to 129th position, the Syrian capital, Damascus, Tashkent and Argentina’s capital, Buenos Aires moving from 125th to 129th. Generally, observations made by the Economist Intelligence Unit point that the rising political instability as well as currency risks are more likely to continue playing key roles role at the bottom of the 2020 index.

Speaking of ranking, you might find the infographic Top 10 Startup Failures of 2019 interesting.