Do you know that one of the world’s youngest countries, South Sudan is also one of the most dangerous countries in Africa?

South Sudan is the most dangerous country in Africa and the fourth most unsafe country in the world — after Afghanistan, Yemen, and Syria.

Here we have compiled the list of some most dangerous countries in Africa using the ratings from the Global Peace Index 2021.

So, keep reading for more! 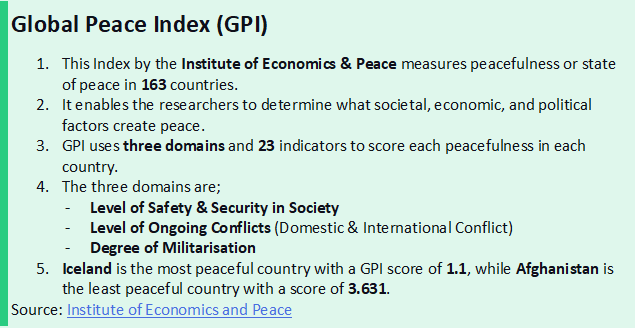 Most Dangerous Countries in Africa

Click here for more on countries in Sub-Saharan Africa and here for North Africa.

The 10 most dangerous countries in Africa

Here are the most dangerous countries in Africa;

The country also incurred the most economic costs of violence (after Syria), which equals 42% of GDP. Ongoing violence and fear have urged its people to be displaced, which crippled agriculture and caused food shortages. South Sudan has more than 35% of its population living in displacement shelters.

Overall state of peace improved in South Sudan from 3.396 in 2020 to 3.363 in 2021. Societal Safety & Security and the Ongoing Conflict domains scores showed improvements in 2021. On the contrary, the level of Militarisation showed a slight deterioration because of a rise in military expenditures as a percentage of GDP, and a reduction in commitment to UN peacemaking.

Second on our list of most dangerous countries in Africa is Somalia, with a GPI score of 3.211 in 2021 (3.177 last year). This year, Militarisation and Safety & Security domains improved, while Ongoing Conflict shows deterioration.

Somalia has been the victim of the most brutal civil war since 1991, which led to the deaths of more than 500,000 civilians. The country fought the most brutal civil war in the entire African region, which displaced more than 20% of its population and increased humanitarian crises. Terrorism, violence, death, displacement, and conflicts have led the country to bear the highest costs, including GDP losses of 34.9%.

The country is on the road to recovery but still become victim to the terrorist elements (al-Shabaab). Terrorism continues to disrupt the overall peace in the country. In the current year, the Ongoing Conflict domain experienced deterioration with rising deaths from internal conflicts.

The Democratic Republic of the Congo

Next on our list of most dangerous countries in Africa is the Democratic Republic of the Congo. The country ranks 128th on the global peace ranking with a 3.196 score (3.184 in 2020). DRC saw deteriorations in its two domains; Societal Safety & Security and the Militarisation level. The Militarisation domain deteriorated due to a rise in weapon imports, military expenditures as a percentage of GDP, armed services personnel’s rate, and a decline in commitment to UN peacemaking funding.

The country still faces population displacement issues, with 5.6 million people internally displaced. Moreover, 962,142 refugees and asylum-seekers from DRC have taken refuge in other places in Africa. Every year, the number of displaced civilians is increasing, and also violence — deteriorating the Societal Safety & Security domain.

The country still faces the issue of internally displaced persons. Around, 700,000 IDPs (Internally Displaced Persons) in the Central African Republic exist due to rising violence and insecurity owing to political instability. The Central African Republic has more than 20% of its population internally displaced. The country also experienced 37% of GDP as a cost of violence in 2020.

This year, the Ongoing Conflict and Safety & Security domains showed some improvements. Due to some fall in political terrors, terrorist activities, and deaths from internal conflicts, the overall scores improved.

With a global ranking of 153 and a score of 2.936, Sudan is the fifth most dangerous country in Africa. This year, the GPI scores show an improvement due to improvement in scores of Ongoing Conflicts and Societal Safety & Security domains. Sudan lies in the North African region. The country faces political conflicts coupled with protests, crackdowns, violence, detention, media restrictions, harassment, droughts, and refugees. These issues have weakened the economy and caused displacement, food shortages, and other humanitarian issues.

Despite the rise in terrorist activities and political instability, homicides level, political terror, IDPs, and deaths by internal conflicts declined this year. Reduction in commitment to UN peacemaking funding indicator led to the deterioration in the Militarisation domain.

This year, Mali’s world peace ranking deteriorated to 148 (144 in 2020), due to the deterioration of GPI scores. All the domain’s scores deteriorated in Mali. The country faces an extreme crisis due to ongoing political instability, conflicts, and violence by armed religious groups, ethnic militia, and security forces. This further worsened the state of peace in the country. The rise in perceived criminality in society, political instability, weapons imports, deaths from conflict (internal), military expenditure, armed services personnel, nuclear and heavy weapons, and IDPs issue compromised peacefulness in Mali.

Nigeria also experienced a fall in its state of peace with a fall in the global ranking to 137(136 in 2020). The GPI scores also deteriorated to 2.589 in 2021 (2.558 in 2020). Ongoing Conflicts and Militarisation domains accounted for such deteriorations. Nigeria faces problems of violent crimes, political instability, terrorist activities, IDPs, and violent demonstrations. This year, there has been a decline in the country’s commitment to UN peacemaking funds and a rise in deaths from internal conflict.

The GPI score and ranking of Cameroon deteriorated this year. In 2021, the GPI score was 2.7 and a global ranking of 145, while it was 2.64 and 141 in 2020. Societal Safety & Security and Militarisation domains showed deterioration this year, while Ongoing Conflicts showed improvement. Cameroon faces internal conflicts, political instability, violence, killings, tortures by the government, and other justice and accountability issues. This year, these indicators scores worsened: Displaced people, UN peacekeeping funding, Deaths from conflict (internal), Weapons imports, Violent demonstrations, and Perceived criminality in society

In the ninth spot among the most dangerous countries in Africa, we have Ethiopia, with a GPI of 2.613 (2.492 in 2020). The country’s peacefulness ranking also plummeted to 139 from 133 last year. All the domains showed deterioration. Scores of these indicators led to degradation in Societal Safety & Security; perceived criminality in society, homicides, violent demonstrations, political instability, and terrorist activities. Similarly, deterioration in armed services personnel and UN peacekeeping funding indicators account for the downturn in scores of Militarisation. The poor foreign relations between Ethiopia and its Neighboring Sudan, Eritrea, and Egypt still affect the state of peace in the country.

On the 10th spot among the most dangerous countries in Africa is the neighboring country of Ethiopia, Eritrea. This year its GPI improved to 2.555 (2.572 in 2020) with 136 ranking (139 in 2020). The country has more than 1 million internally displaced people due to recurring wars, droughts, famine, and other humanitarian issues. This year, the Societal Safety & Security domain scores worsened due to a rise in political instability. Similarly, the Militarisation domain reflected deterioration due to a decline in commitment to UN funding.

Political instability, internal conflicts, and other humanitarian crisis overshadow all the good Africa can offer to the world. The country has a lot to offer to tourists, but unfortunately, they cannot visit due to fear of their security. We hope someday this beautiful rich in natural resources continent steps out of the conflicts, terrors, famine, droughts, and other horrors and welcomes the world with open arms.