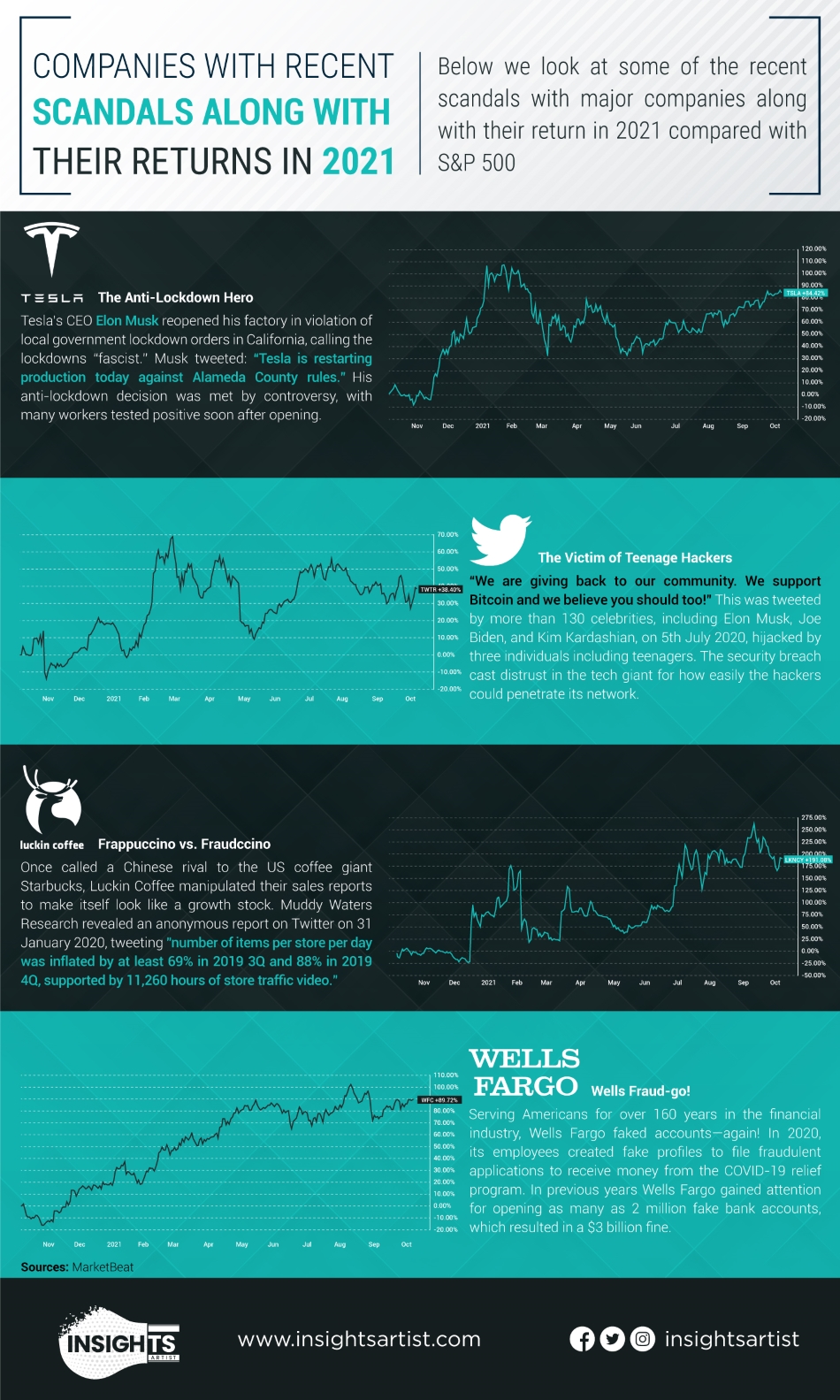 Recently, one of the most scandalous companies may be Facebook for social media users. In October 2021, a whistleblower spoke out on an American TV program about “conflicts of interest between what was good for the public and what was good for Facebook,” implying Facebook is intentionally misleading the public. Prior to this were reports by Wall Street Journal that Facebook has built a system where ‘high-profile’ users are exempted from user rules and that Facebook knew its social media platform is harmful for teenagers.

These scandals throw us a question: “Is this company socially responsible?” But why does social responsibility matter? That’s because companies can have a huge influence on people’s behavior and thinking. For example, almost 3 billion people use Facebook in the world and thus it has a enormous impact on society. It has to do good than harm, right?

The visual content above picks up four socially irresponsible companies that went through scandals in 2020. Along with the description of the scandal is the company’s stock price chart of the past one year to analyze the aftermaths.

Do You Remember These Corporate Scandals?

When COVID-19 started spreading around the globe in the early 2020, the entire world was finding its way how to deal with the situation. Many states and countries went into lockdown, including California, USA, where Tesla manufactures its products. Amid the chaos and confusion, Elon Musk, CEO of Tesla, made himself clear on the state’s lockdown policy on Twitter multiple times. One of his tweets on 12 May 2020 goes:

Tesla is restarting production today against Alameda County rules. I will be on the line with everyone else. If anyone is arrested, I ask that it only be me.

His defiance of lockdown faced a mixed response: the former US president Donald Trump supported Musk, while a worker infected positive to COVID-19 at its plant expressed concern over a perceived lack of caution on the production line. The company puts emphasis on CSR by selling zero-emission cars and Musk spends a lot on charity. However, was it really socially-responsible action to call the public health orders “fascist” and outrightly go against them, having 60 million followers? Right or not, he was the winner at the end of the day: Tesla stock price soared by more than 700% in 2020 and is still rising to record high.

Are you on Twitter and following celebrities such as Elon Musk, Barak Obama, Joe Biden, or Kim Kardashian? Then you might remember them tweeting abruptly, asking you to send them Bitcoin:

We are giving back to our community. We support Bitcoin and we believe you should too! All Bitcoin sent to our address below will be sent back to you doubled!

Having more than 180 million active users at the time, one of the listed wallet addresses had more than 320 transactions within minutes from the initial tweet. Bitcoin to the value of $110,000 had been deposited into an account before the scam message was taken down by Twitter.

Surprisingly, a group of three including two teenagers hacked the accounts, allegedly in cooperation with its employees. Hacking the social media giant was not a big deal for these young people. Or was the company just ill-equipped to protect users’ privacy? Its stock price dipped slightly soon after the scandal, but it recovered to hit record high in the early 2021. In addition, more than 20 million people have singed up for Twitter since then.

As a potential rival to the American coffee giant Starbucks, China launched Luckin Coffee in 2017. It was one of the fastest growing business. In 2019, it started trading on NASDAQ, opening more than 4,500 stores to be the biggest coffee chain in China, until an 89-page report disclosed its accounting scandal in the following year. On 31 January 2020, Muddy Waters Research, an American investment firm, tweeted with the anonymous report accusing Luckin of inflating its sales:

Following the disclosure, an internal investigation found that COO Juan Liu had faked its sales by around US$310 million. The amount it fabricated was more than a quarter’s worth of business. In accusation of fraud, NASDAQ suspended Luckin Coffee later the year. On 5 January, it finally filed Chapter 15 bankruptcy in the US, although its shops remain open to business. The stock price plummeted by 75% in 2020. However, it is showing a slow but steady recovery in 2021; nevertheless the prices are still too far from its record high.

As America’s long-standing financial services company, Wells Fargo & Company has caused several scandals. Therefore, its account fraud scandal of 2020 may not have come as a surprise to some. However, the scandal of 2020 was especially vicious amid the pandemic. More than 100 of its employees unethically availed themselves of federal coronavirus relief money. An internal memo said:

As a company, we are vigilant in detecting fraud. While these instances of wrongdoing are extremely unfortunate and disappointing, they are not representative of the high integrity of the vast majority of Wells Fargo employees.

Despite sincere words in the memo, the company had created millions of fraudulent accounts on behalf of its clients prior to the relief fraud. It agreed to pay US$3 billion fine to settle the criminal charges in February 2020. However, the stock price is rebounding from the acute plunge soon after this agreement.

A master’s thesis suggests that there is a 95% certainty that a firm’s engagement in CSR do affect the firm’s stock price. However, it is not the only factor to determine the return. Needless to say, other factors such as governments’ monetary policy, international issues, or even elections affect the market. Despite bogus behavior of socially irresponsible companies, the stock price can rebound. Moreover, it can even reach the higher limit if the company is solid enough with a positive catalyst.

So, what happened to the latest socially irresponsible company, Facebook? Soon after the whistleblower speak-out and the following blackout, its share fell more than 10%. On 28th October 2021, Facebook changed its name to Meta as part of a rebrand strategy. Following the rebranding announcement, its stock price is rising again as investors look past the scandal. It will be interesting to see whether it dips further or survives in coming months or so.

Are You Building Your Portfolio? 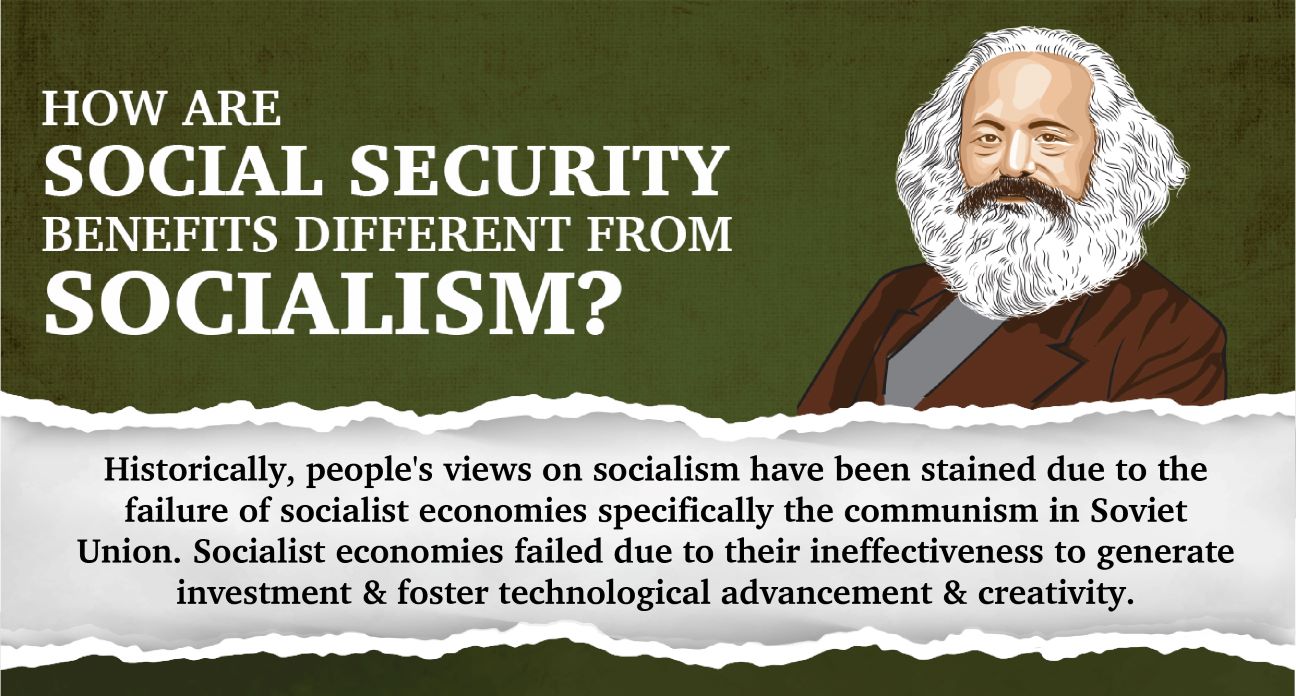 How are social security benefits different from socialism?