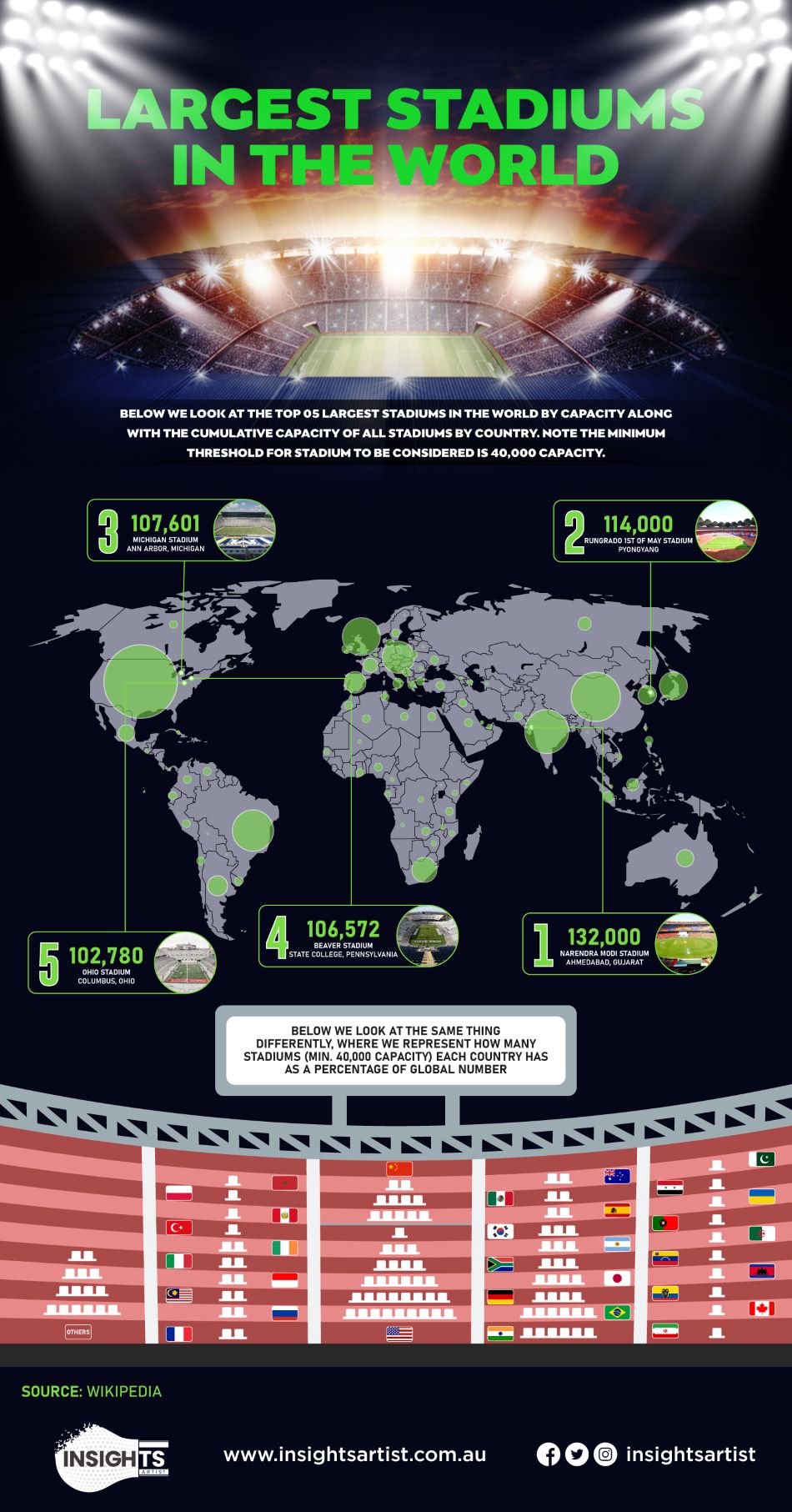 2021 was the year of Olympics. The Olympic Games Tokyo 2020 Opening Ceremony took the crown as the most-watched TV program of 2021 in Australia, with 2.7 million viewers. The Opening Ceremony took place at Japan National Stadium in Tokyo that also hosted track and field athletes events. It certainly isn’t one of the largest stadiums as the capacity of the stadium is 68,000. However, it is a modest and unique stadium built largely with timbers.

The venue is an important component to the success of an event, as it creates the overall atmosphere of the event, whether it is a sporting match, conference or even your birthday party. This infographic shows the world’s largest stadiums by capacity where numerous successful and historical events must have taken place.

The largest stadium in the world is a cricket stadium in Ahmedabad, Gujarat in India. It is the former Gujrat Stadium whose capacity was 49,000. Then, the 14th Prime Minister of India, Narendra Modi, reportedly proposed its reconstruction to upgrade the stadium. The reconstruction finished in 2020, increasing its capacity to 132,000. Not only hosting the World Cups of cricket, the stadium hosted “Namaste Trump,” the inaugural visit of the former US President Mr. Donald Trump in 2020.

#2 Rungrado 1st of May Stadium

Pyongyang, North Korea (DPRK) proudly owns the second largest stadium in the world. Although the stadium originally had an official capacity of 150,000, it seemingly has a capacity of 114,000 after a 2014 remodel, according to observers. The exterior of the stadium features 16 massive arches, resembling a magnolia blossom. The spectacular DPRK Mass Games happen at this venue. In 2019, the Chinese General Secretary Mr. Xi Jinping witnessed the performance of Mass Games together with DPRK Chairman Mr. Kim Jong-un there.

“The Big House” in Michigan, the US, has the third largest capacity of 107,601. Securing its position as one of the country’s most classic, widely recognized sporting facilities, the Michigan Stadium has been the home of Michigan Football since 1927. Additionally, the stadium holds several records for the largest attendance, one of which is the 2014 International Champions Cup soccer match between Real Madrid and Manchester United, with an attendance of 109,318.

How Many Large Stadiums Each Country Has?

Looking at the same thing from different perspectives is always interesting. Suppose we call a stadium with over 40,000 capacity a large stadium. Slicing down the data into how much total capacity of large stadiums each country has, the US tops, occupying almost 31% of the worldwide capacity. Then following is China with 11% of the largest stadiums, and India houses 6% of the largest stadiums.

Love rankings? Then, there are more rankings on InsightsArtist: